My kiddo is 3. She’s scared of spiders, the drain in the tub, and worms. I get that. Nightmares of squirmy creepy creatures and a hole that leads to nowhere (she truly hates that drain). But, what’s the scariest thing of all? Not a zombie or the boogie man. It’s this guy: 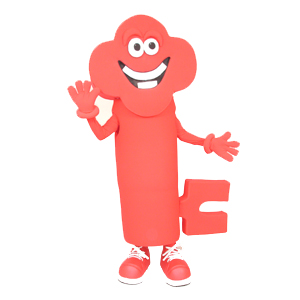 Name: The Key Toon aka The Key (as my daughter calls him)

Hobbies: Walking really awkward and slow. Smiling. Waving. Scaring the crap out of the childrens.

Ok, maybe just my child (and Mandy’s child). Here we are… hanging out all excited for March of Dimes when The Key sees us. He slowly wobbles our way and I feel a scratching on my leg, followed by a frantic screech/babbling of, “Let’s get outta here! Let’s get outta here!” I look down and my child is trying to claw her way inside of me to hide from Mr. Key. It took me a minute to put it all together, but we had to tell him to head the other way or my kid (and Harper) were going to have little mini heart attacks.

He leaves and I thought that would be the end of it. He’s gone. Out of sight (mostly). Nope. My kiddo is hanging onto me so tight I didn’t even need to hold her. I tried to sit down to talk to her and she pretty much climbed on top of my head, while still mumbling, “Let’s get outta here…”

She got better as we went on our walk, but when we were back to the main event space… the fear all came flooding back to her. She did not want to be anywhere near that place. She was having a little meltdown. We left and Harper and Ruari kept chatting about The Key. We promised them that the key was just a guy in a costume. They still thought he was scary as hell.

As the evening went on… still with The Key! She showed me how he walked (this included a weird wobble and the creepy smile) and kept telling me he was “distracting” her. 4 days later… still. talking. about. the. key. Ha! The story has evolved a bit to, “Well, The Key was distracting me. He wasn’t trying to hurt me, but he’s still creepy. I don’t like him.  He scared all the poopy out of my body. I bet he went home and took his costume off and said, ‘I’m done being creepy, phew’ and he was actually Kim. Kim was the key.” So…. sorry to my friend Kim. She is now the wearer of the key costume (no convincing the kiddo otherwise). Ha!

It broke my heart how scared she was of this key, but now the story sort of makes me smile. I showed her The Key photo today and she just laughed…. then said, “K, turn off The Key photo.” Ooooooh, 3. Gotta love these moments.