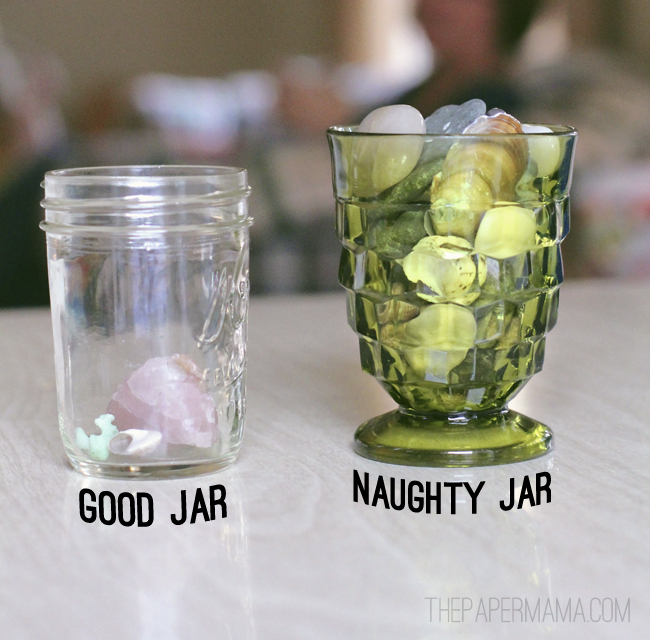 My sweet/darling/fantastic girl is, well, THREE. Wow, she is SO three. Just today she told me she didn’t like me, followed by a big hug and a kiss. She’s learning new words and is emotionally all over the place (like a hormonal teenager). We’ve been trying the usual thing: putting toys in timeout when she’s naughty. This worked for the past year. Buuuut, she’s getting too sassy and smart now. She realized that her toys in timeout for one day or 5 days is no big deal. So it was time we needed something new.

This is where the good jar and naughty jar come in. My friend, Jill from Baby Rabies, had mentioned she’s using this sort of reward system with her son and I thought it sounded perfect for my stubborn daughter! What is the point of this? If she fills up the good jar she gets a fancy reward. She’s filled it up once in 3 weeks. She got a My Little Pony on a scooter. That was what she picked out for her prize. Her next prize she said she needs a My Little Pony Zecora doll (are you seeing a bit of a obsession, yeah). Side note: I had no idea how spendy this Zecora doll was until I looked it up. Usually we try to stick to around $10 per prize. Next time.

How does it work? Well, if my kiddo is absolutely refusing to get her jammies on at night (this is a NIGHTLY thing) then we say, “Ok, if you get your jammies on in 5 minutes… you get to put a rock in the good jar!” If she takes 10 – 15 minutes we start to say, “Well, we need to get our jammies on. If we don’t start to get ready for bed, that’s a rock out of the good jar and into the naughty jar.” This usually causes a freak out slash rush to get ready for bed. Except for last night… She said she didn’t care about her rocks until I took out 5 in a couple minutes. She really cared after that. We are back to 2 rocks in the good jar. I guess we have a while until we have to get the Zecora doll.

We use her rock collection for this (she’s a rock and shell hoarder). She still hasn’t figured out that larger rocks mean your jar fills up faster. She usually picks out the shiniest/prettiest rock. Ha! But, this system has been working. While we’re out and she yells at me because she doesn’t want to leave the toy store: rock in the naughty jar. If we have a wonderful trip and the kiddo has been so great the whole time, we put a rock in the good jar. For a little while she decided she didn’t want to participate in preschool. SO, I told her if she didn’t want to go we’d stop altogether. She didn’t like that idea, so I also added, “If you participate each day in preschool, we get a rock in the good jar.” I think she was just having a bad couple of weeks and it turned around. She’s back to loving it!

Pretty much: this has been great for us. Timeouts only worked for a VERY short time, so thank goodness for this.

Do you do a reward system with your kiddo’s?