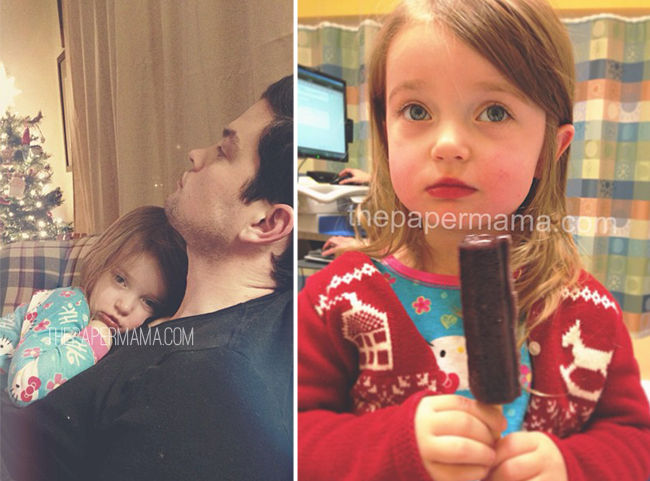 New Years Eve we had a scare. I mean, it was so scary. I had no idea what to do, I felt helpless.

On New Years Eve… R came down with a fever. She was pretty warm and lethargic, so we gave her some children’s fever medicine and put her to bed. We were staying up late and watching a movie (cause it’s NYE, gotta stay up late). By 11:30 we heard her mumbling. I thought she was having a nightmare, so I went in to comfort her. This is just the part that I will probably never get out of my head, even though I wish I could… R was laying there, staring up at the ceiling, breathing with shallow breaths, and making a weird mumble sound. My first thoughts, “OMG. She’s can’t breath.” “She’s dying.”

Slowly she started coming out of it. Very spacey. Shaking SO bad. Finally started to respond to us. I just completely gave in and started balling. All I was saying, “Hospital. We’re going to the hospital.”  My husband didn’t need any pushing, he was already throwing on shoes and grabbing a blanket for R. We rushed to the hospital. It was just a few minutes to the New Year. We waited for the doctor. Hear the “Yay!” and “Happy New Year!” from all the doctor’s and nurses in the empty hospital. The doctor came in. We chatted. He checked out our kiddo. He new exactly what had happened. Our baby had a seizure. OMG. That scared me. What?

Turns out it was a febrile seizure. It’s normal for 2 – 5 year olds to have these with fevers. Not all kids get them, but holy crap… some kids do. AND, it’s scary as shit. I can’t even. The doctor had us hang around for a couple hours. They gave her popsicles, a stuffed puppy, and many stickers. They were fantastic. They made a scary situation less scary for our 3-year-old.

R was better on Tuesday. Still had a fever, but was playing. I’m just so happy that everything is ok. I was so scared. I’m so glad that’s over, and I’ll be more prepared and mentally ready (and nervous as hell) for her next fever.

I hope you all had a great New Year. We ended our 2012 with some craziness. Time to kick off 2013 with good health and happiness.