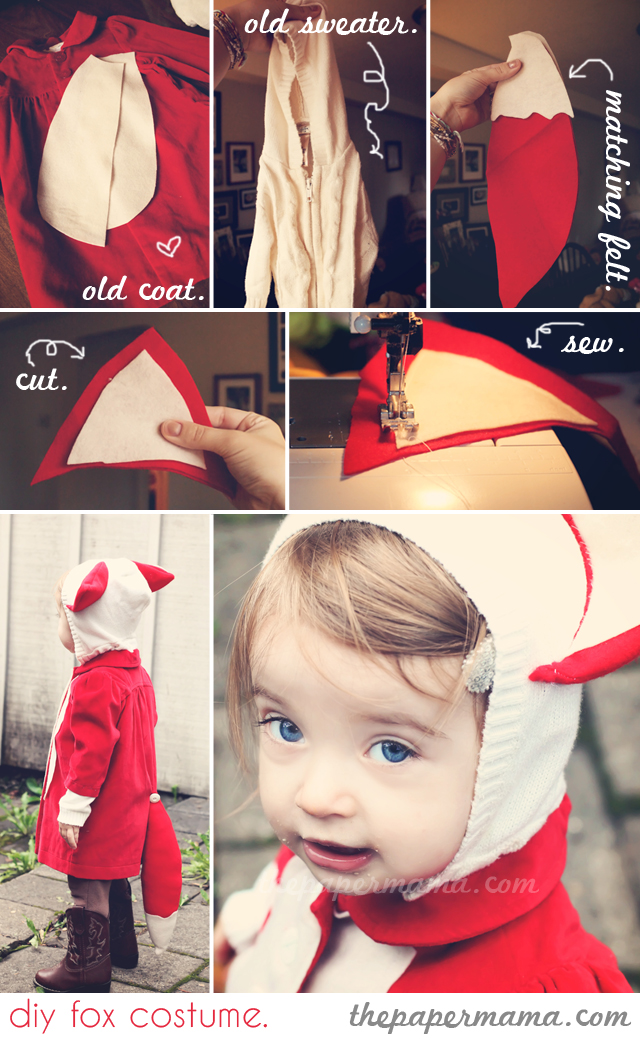 I’m pretty cheap crafty…. and I really wanted to make Ruari’s costume this year… at first I was considering creating a monster made out of jammies and felt…. but, I just wasn’t feeling it. She’s not really a monster kinda girl. BUT, she definitely is a doggy/fox kinda girl! I rummaged through her old clothes and found a red jacket that still fits…. an old sweater…. and felt I had in my fabric bin. And, ta dah! Her costume is made. I spent $0…. (well, the cost is probably around $8… I got the clothing on clearance when R was a baby and the felt was cheap-o).
You can TOTALLY do this for yourself! I may have put a total of 1.5 hours into this project. Not much time…
Supplies needed:
– An old jacket that still fits.
– An old sweater (with a hood) that you’re done with.
– Felt (I used 2 sheets of red and 2 sheets of cream).
– Stuffing for the tail
– Sewing machine
– Thread and needles
– Optional: buttons.
How I did it:
– First I took my old sweater and cut the hoodie and sleeves off. Set them aside.
– Next I freehand cut the shapes for the chest, ears, and tail out of the felt.
– Remove the buttons from the jacket (if there are any). Pin your chest felt to the front of the jacket. Sew it on. Then, I added white vintage buttons to the jacket instead of the red ones it came with.
– Sew together the tail (inside out) and ears (leave opening so you can flip the fabric and then stuff it). When they are flipped, stuff the tail. Stitch it closed. I didn’t stuff the ears (you can if you’d like) and sew the ears closed.
– Hand stitch the ears to the hood. I sort of bent the ears a bit so the would stand up on their own. When finished… sew the finished hoodie onto the collar of the jacket.
– So, the sleeves of R’s jacket were really short on her… so, I added the sleeves of the sweater to the end of the sleeves of the jacket. This is optional… but, I kind of like it. It’s like they are the fox paws. I hand stitched those on.
– Stitch the finished tail onto the back of the jacket. Add a button, if you’d like. That’s it! I also considered making the tail removable… but, I didn’t go to the trouble. Might be nice. 🙂
That’s what I did! I don’t really know any technical sewing terms…. etc… I just guessed. “:D Pretty much: this is a great way to create a cheap/fun/cute/last minute costume for your babe (or even yourself….). A bear? A wolf? A kitty? A chicken? ;D
Happy Halloween!