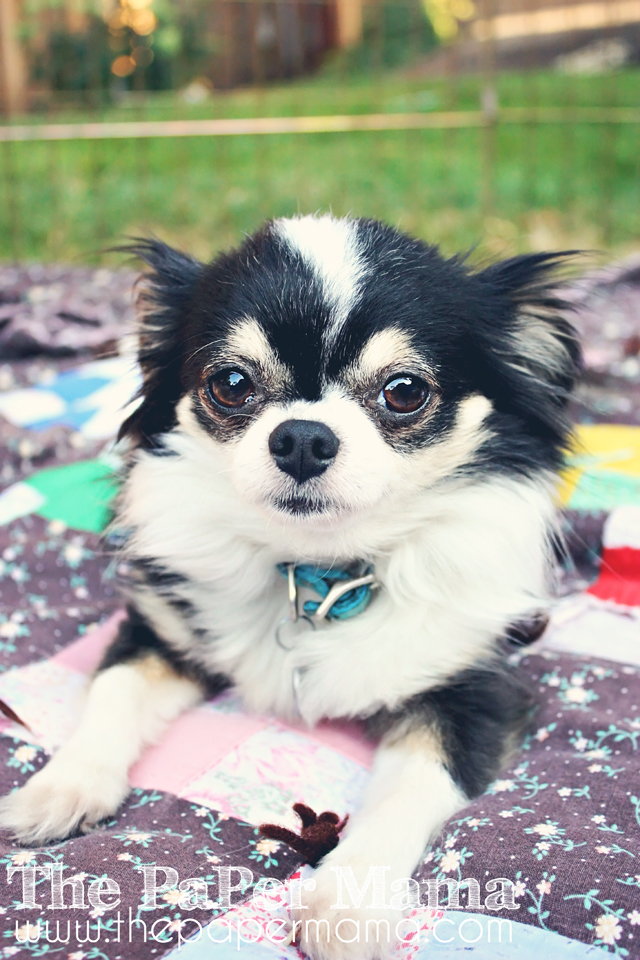 Angus, my Chihuahua, often tries to kill himself. He does things that are obviously lame. For example:
– One time, after getting loose from his leash, he ran up to a bull mastiff and barked and nipped at this dog’s face. Luckily this dog didn’t give two poo’s about him.
– Trying to swallow an uncooked whole beet… without chewing… it was bigger than his mouth. He choked. A lot.
– He continuously eats possibly poisonous mushrooms whenever he sees them on our walks. Eating them faster than I can stop him. This results in LOTS of barf and wondrous diarrhea.
– He was wrestling with my mom’s larger dog and managed to get his eyelid hooked on the loop of my mom’s dog’s name tag. Piercing it. What? He’s awesome.
– He manages to find a way into the leftover BBQ charcoal every time. Eating it. Resulting in bloody poo and diarrhea. AND, a trip to the vet EVERY time.
– For WHATEVER reason… every once in a while Mr. Angus decides to chew on his feet nonstop until they bleed and his little furry toes are bald. What up with that?
– So…. Angus has these anal glands. AND, they rupture. What? Yes. They do. And, then he needs to have emergency surgery. He is so neat.
– We have to monitor how much food we give him… if we left it up to him: he would gorge himself and eat WAY too much. When he does find his way into some food stash… he eats until he can’t fit anymore and sits in the corner whimpering in pain with a massive belly.
– One of the worst things he’s done: while I was heavily medicated from the intense birth surgery I had…. I accidentally dropped one of my 600mg ibuprofen without even knowing it (still on morphine)… and, Mr. Awesome, AKA Angus, swooped it up and ate it. About an hour later… I realized I had never taken my ibuprofen. We figured out Angus had eaten the pill and later barfed it up. The next day he was extremely sick… we took him to the vet and they were worried his body would shut down and he would die. LUCKILY Angus made it… all because he barfed the pill up shortly after he had taken it. I guess large dogs often die from swallowing pain killers and he was so lucky. That was a TERRIBLE day. I was so worried for my puppy. 🙁
– Most recently he ate another round of charcoal. Ugh.
Making this LONG story short… he’s pretty smart… neat and gets into way too much trouble. BUT, we love him and could never and would never replace his stinky anal gland ruptured bum.
♡ Chelsey
Leave a Comment